TvG: How would you characterize users’ experience of persuasion in the context of technology? Is there a difference in how the user perceives persuasion that comes from a computer vs. from a person?

BJF: It’s a hard question. A lot of persuasion happens because of social pressure or social influence. The person is there in front of us… they do us a favor and we feel we owe them something back. That person is credible or there’s a group of people that are doing some activity. There’s social pressure there.

Fortunately, those were exactly the experiments I performed in the early days at Stanford to show that computers could persuade by using these social mechanisms. So on one hand, from the strictly scientific theoretical standpoint, we could say “there’s no difference”.

Computers can use the same social mechanisms to persuade. In a more practical context, implementing it on the web or a mobile system, you cannot highlight social cues easily without also increasing risk of failure. You can’t turn up the volume on social cues as much as you can when you’re dealing with real humans. If you push too hard on social using today’s technology, the experience eventually breaks or feels artificial.

You can certainly create avatars or characters. But if you’re on the product design side, you have to be very careful about imbuing your product with social characteristics. There are many examples of that failing.

People like to think of their technology as tools for getting things done. I think its better to design those tools to persuade in ways that are subtle, by downplaying the persuasive aspects. Make the overall experience about people persuading themselves and being unaware that they’re being persuaded. I think it’s a better approach right now.

TvG: I’ve wondered if some of the social software agents were considered to have failed because they violated social rules? Clippy, the assistant in Microsoft Word for example. Some people love him, some people hate him. But he completely violated common social rules. He interrupted you while you were working. His behaviors were things you would get upset at a real person for doing.

BJF: I think you’re right. People would rather have tools. If I go to the gas station to pump gas, all I want to do is put gas in my car. But if the gas pump starts taking on a social persona by saying “how are you today”, then they’ve highlighted the social cues. I didn’t go to the gas station to have some kind of social interaction with the gas pump! I went there to put gas in my car and then be on my way.

If you put an embodied social agent or the screen or highlight the social cues, you’re changing it from “I’m using a tool”, to the other corner of the functional triad, which is the social experience. That goes against what most people want to get out of computers, They’re not there for a social experience. They’re there to get something done and they see it as a tool. Laying that out in the functional triad (see below) in terms of tool, medium and social actor was important for me and for captology as a field. 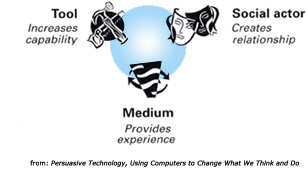 Now, with Web 2.0, we’re moving to the social actor. The world of captology is changing because the most effective persuasion that’s happening online these days is through these social interactions that are mediated through the web and the internet.

TvG: So you mean that the interaction is with other people, mediated through the internet, rather than with machines?

BJF: Right. But the system is creating ways for other people to persuade you effectively, by reminding you to sign up for Linked In, for example, or by inviting you to see a photo album your sister made. So it’s not the people alone doing it, but the people plus the system that adds up to the viral form of persuasion that makes Web 2.0 what it is. Web 2.0 is all about people persuading other people to go online, sign up for the service, contribute content, rate content and so on. It’s all persuasive stuff.

TvG: So, can you explain to my readers how persuasion relates to designing for emotion?

BJF: To do a good job of designing for persuasion, you have to design for emotion. The emotional state of the person determines how they will respond to requests, how open they are to suggestion and so on. So you really have to examine what is the current emotional state and what emotions would be beneficial. In other words, what emotions have to be present, or not present, to produce the desired effect. In almost all cases, emotions are the gateway to changing attitudes and behaviors.

TvG: As part of my thesis, I compared your model with Patrick Jordan’s, Donald Norman’s, and Pieter Desmet’s models. Would you draw a parallel between the three parts of the functional triad (Tool, Medium and Social Actor) and say, Donald Norman’s Visceral, Behavioral and Reflective levels? Both models deal with appearance or physicality in the visceral sense, interaction in the behavioral sense, and status and identity in the reflective sense.

BJF: That’s a good question. I’d need to think about that to give you a tidy answer comparing the various models. So I’ll gives you a simpler answer now: What’s intriguing for me is that the similarities in models suggest that we humans aren’t as complicated as most psychologists would have us believe. I don’t think we humans are complicated. I think our contexts are complicated, and the ways we interpret those contexts are varied. And that’s what makes us look more psychologically complicated than we really are. We have a few basic drives and motivators and those account for just about everything we do.

I love the idea of designing for emotions or designing to achieve certain emotions. It’s about how you get people into a certain state or mood that puts them in a position to adopt a new attitude or perform a difficult new behavior, like quitting smoking. I think that designing for emotional transitions is a big part of persuasion.

TvG: That’s something that I hadn’t seen explicitly expressed anywhere in the design literature. I’d read it in psychology, but not design…. that emotional transitions, or as I’ve called them, “chains of emotional states” are a main motivator for people to make changes in their attitudes or behavior.

BJF: One of the things we’re doing right now in my lab is working on a project called Patterns of Persuasion. We’re looking at a grammar for how behavioral change happens. It tends to happen in stages. Psychology research has just started to really understand the sequential aspects of persuasion, in part because in experimental psychology our tools are limited. I believe this will change soon. The ability to run complex experiments quickly using the Internet will give us lots more insight into sequential factors in persuasion. In fact, the best work here is being done by industry folks who are designing web sites for persuasion using sophisticated analytical tools. Don’t expect these industry folks to publish their findings in academic journals.

In a traditional lab setting, it’s hard to run an experiment where you first have to make someone insecure, for example. Whatever the persuasive process is in the real world, it starts with unsettling the person and having them enter another emotional state. They enter a state of fear or anxiety and that motivates them to find a behavior that reduces the anxiety.

TvG: So everyone is looking for a way to balance their emotional state and reduce unpleasant feelings.

BJF: And I also think there are ways to change behavior that don’t happen through emotions, like operant conditioning. In cases like this, I’m not sure if we define the cause as emotions. Some people wouldn’t include “conditioning” under persuasion, but I do because I define persuasion broadly, as “an attempt to change attitudes or behaviors”. Conditioning approaches like reinforcement function on such a primitive level that I’m not sure emotions are involved. And that fascinates me.

But I think for most user experiences that people are designing online. emotion is definitely a component. For video games, there are rewards and punishments and the persuasive part of those is layered in terms of emotional components. Like you need to get to this next level, to get this tool, so you can solve this problem. It’s not just reinforcement. When I reward my dog for staying off the couch, that’s not an emotional experience, it’s only one little unit of behavior with nothing else involved.

TvG: Wouldn’t you say though, that the behavior comes from a pain/pleasure response, where your dog associates the pleasure of a reward from you with the behavior of staying off the couch?

BJF: A chemical is released in her brain when she gets the treat, and that makes the cause and effect relationship stronger between the treat and the behavior in her brain. So is that chemical an emotion? Does it lead to what we call an emotion? I don’t know. I would have to refer to experts in this area to give a firm answer. Sure, you can train lower animals through reinforcement, but are they experiencing emotion? I’m not sure it’s important to decide whether a fish experiences emotions or not. They certainly experience fear, and desire.

TvG: I’ve recently read some research where it was suggested that emotions are an ideal way for simple animals to make appropriate survival decisions. The fear response of that core reptilian brain is pretty basic to survival.

BJF: Now that you say that, I may have to retract some of my previous statements! And that’s okay; I’m wrong sometimes; not all my experiments work. If I knew everything, then I wouldn’t need to run experiments. And if I knew what I’d discover before running an experiment, it wouldn’t be research. You have to be okay with failing at times if you hope to explore a new domain.

Be sure to tune in for part 3 of this interview!