Happy New Year! Back in November, 2008, I wrote a post on behalf of William Lidwell asking the readers of affectivedesign.org to submit comments and observations for possible inclusion in William Lidwell and Gerry Manacsa‘s new book; Deconstructing Product Design. 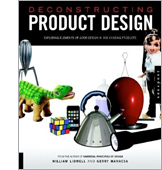 At the time, I submitted some comments and observations of my own. So I was thrilled to have several of my contributions accepted for the publication. Deconstructing Product Design features witty and insightful comments from a number of esteemed designers, including friends and peers in the industry like Jon Kolko, Dan Saffer, and Steve Portigal. I contributed comments on a number of entries, with two making it into the final publication.

<< Back to affective design

[…] We contributed to Deconstructing Product Design by William Lidwell and Gerry Manacsa. […]