In Part 1 of this interview, I spoke with early Web pioneer Harry Max about how he used emotion to create the first secure online shopping experience. In Part 2 of this interview, Harry and I talk about how sensory sub-modalities influence and elicit emotion and picking the right personality for an interface in terms of power and status.

TvG: We’ve touched on this, but I’d like to get a little more specific. What connection would you say that our sensory sub-modalities have with the elicitation of emotion?

HM: The one obvious example that I mentioned was taking the small, black and white picture and making it a large, colour picture. So, in getting someone to have a positive emotional reaction to seeing a human being or a new product. As they got closer, it became more vibrant, larger, more hi-fidelity and more colourful. That’s a simple example of trying to engage someone through simple visual sub-modalities and provoke curiosity, which was a goal of the site.

TvG: I’m familiar with the NLP technique of changing your internal representations by making them brighter, bolder, louder, more vibrant, etc. So that seems like a very logical carry over.

HM: Right. Of course there was also a fairly healthy application of NLP meta-programs throughout the site as well. So, taking account of whether people were “towards” or “away-from” motivated in eliciting feedback.  And being respectful of the fact that under certain conditions, you want to give people choice, but not too much choice in how they process the information. 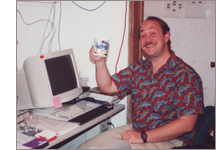 The thing we always joked about back then was the fact that we didn’t have a scratch and sniff interface! So although the technology was secure, the idea of online security was nascent at the time. And one the key objectives that I had in designing and building the site, was to maintain the “perception” of security not just actual security.

So fairly high on the list of design requirements was the specification that any interaction had to maintain the illusion of safety. This of course manifested itself in all sorts of interesting ways that I can’t discuss at the moment.

TvG: I imagine some of them were visual. Was there any sort of graphical or textual treatment that you recall using?

HM: It took all forms. Everything from the colors we chose for the site, down to working with the specific language we used. For people who remember that far back in web design, the first “shopping cart” was not a shopping cart. It was actually a list of remembered items.

So the metaphor was that you were shopping in a catalog. The idea of identifying a product you were interested in was to “remember this item”. It wasn’t to put it in your shopping cart. And this was very early. As early as early gets when it comes to online shopping.

People Magazine didn’t really feature shopping online until December ‘96, which was almost two years later. In our user studies on managing the perception of security, we found that people were afraid they were buying something when they put it in a shopping cart and there was no way out of it.

TvG: So they were reticent to purchase because they felt there was no way out?

HM: Yes. There was a way out but it was further down the process and they hadn’t seen it yet. But by getting people to drop things into a list of remembered items, we skirted around the issue of whether they might or might not have an opportunity to change the quantity of an item or remove it altogether. And that was all the “perception” of security. We employed the metaphor in order to maximize people’s comfort in their experience.

TvG: How would you say NLP has helped you in terms of communicating personality through design?

HM: I guess I tend to take the view that personality itself is, in effect, an adaptation that people develop to respond to the world in order to get their needs met. This probably falls out of the world of the Enneagram, a system that describes nine archetypes of people.

There are many systems, but I think the Enneagram does a fairly good job of articulating how childhood needs and family-of-origin issues translate to personality characteristics. When you map that across to NLP, a site itself can actually take on a personality.

The personality of the Virtual Vineyards site, which eventually became Wine.com was Eneagram #2; The Helper. So all the language and all the design features in the site were designed to be consistent with someone who was there to be of service. That was a personality type that we wanted people to recognize since it makes people willing to engage.

The Enneagram Type 6 is characterized as a “fear based personality” that is very scarcity minded. That might be more appropriate in the design of a site for a financial institution, for example. Once you’ve decided what the personality characteristics are that you want to portray, and what kind of emotional response you want to get from that portrayal, it then becomes a question of what design elements will get you that response. From font colors, to font size, to the actual choice of words and language that are necessary to get people to respond in the way you’re designing for. Does that make sense?

TvG: Absolutely. One of the things that I’ve explored is the interpretation of all human-to-human interaction as being composed of exchanges of power and status. In this case, status is the amount of regard that you give another voluntarily. We can then relate this idea back to the three parts of the brain. The reptilian brain at the brain stem is responsible for unconscious processes like attraction, lust, fight or flight. Then, we have the mammalian brain on top of this, which is responsible for interaction and communication in the form of “pack” behaviors which involve exchange of power and status. On top of that is the neo-cortex, or the human brain, which is responsible for conscious, reflective information. Does that sound plausible?

HM: Yeah, I’m familiar with it and that sounds exactly right. But I’m not sure it affects personality. The reason for that is that I’m making a distinction is that I think people “are a personality”, they don’t “have a personality”. I think personality is the ego’s response to the world around it, and the psychological responses it develops in order to get its needs met.

TvG: In my thinking on this, all different personality types still need to relate to each other in terms of power and status. So, for example a Type 2 person; the Helper would likely be submissive rather than dominant. And the submissive personality invites dominant behavior. In this case, users feel comfortable having control and taking action on the site.

TvG: Now in terms of status, you can examine at the way a site interacts with a user. I make a request of the site by pressing a button (similar to the way I might tap you on the shoulder). If you see me as having little or no status, you may completely disregard me. In the same way, when the site does nothing, offering me no feedback whatsoever…

HM: You could say you’re being ignored.

TvG: Exactly! So the site is ignoring me and I unconsciously perceive that as an affront through my mammalian brain, where the unconscious reptilian brain and the conscious human brain are mediated.

HM: You’re absolutely right. That’s why every page on the Virtual Vineyards site had a feedback link, for example. It was a very simple device to allow people to engage, but it gave them an out. We were at the limits of the technology at the time. We couldn’t track clicks in real time to see where people got stuck, but we could allow them to “tap us on the shoulder” so we could respond quickly.

TvG: I’ve been considering all interactions between people, or people and the environment, as interactions where people respond unconsciously as though they are in a pack situation.

HM: I think that’s basically correct. I know that using personality typing with the Enneagram caused me to go through every single error message I wrote to make sure it was written from the point of view of the Helper. So unless your computer crashed, with Virtual Vineyards, you were having an entirely different user experience with a computer than anyone had over had before.

TvG: Would that be because of the submissive personality of the interface?

HM: Yes. And not just submissive, but solicitous. While I generally agree with the dominant/submissive distinction and the status orientation, I do think there are other personality characteristics that come into play at a higher level of abstraction that absolutely essential for mediating the relationship between user and interface.

TvG: Can you give me some examples?

HM: Well, the site personality was based on a subject matter expert. The key expert at Virtual Vineyards was Peter Granoff, the Master Sommelier. He’d spent twenty years studying the art of wine.

Generally, people regard Master Sommeliers as being arrogant. Based on the service model, we wanted to confer upon him incredibly high credibility, but incredibly low status. And that was because of the “at your service” personality orientation. So he became the “Cork Dork”.  Peter, who now owns the Wine Merchant in San Francisco, was the resident expert on the site, with all the credentials of a Master Sommelier. But in his language, presentation and identity, he was reflected back to the user as the humble Cork Dork. This characterization of the sommelier allowed us to manage perceptions of status. It was Peter’s idea. People loved it.

HM: Right. But that didn’t change the level of authority with which he represented the company or its products.

TvG: In fact, it probably brought it down to a level more comfortable and acceptable to the average consumer.

HM: Which was why it was the first successful consumer shopping site. This was seven months before Amazon.com, so it was really early. From this point of view, I felt it was completely flawless in its design, and it was NLP that got me there.

TvG: Well, thanks so much for your time Harry! This has been a very enlightening experience, as always.

HM: Thanks! It was fun! I hadn’t really thought about this stuff in a long, long time.

For part 1 of this interview, see:
An Interview with Harry Max – Pt.1